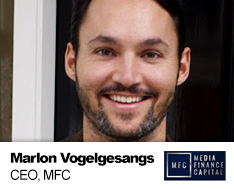 Marlon is the CEO of Media Finance Capital. He joined the company in January 2019 to oversee the day-to-day operations as the Chief Operating Officer.

Previously, Marlon was the senior investment manager at Head Gear Films, which he joined in 2015. During this tenure, Marlon oversaw the provision of structured finance to 20-30 new projects per year, spanning across the film, TV and video game landscape. Other experience includes engagements in physical production and format development for German media concern UFA in Berlin. Marlon holds a master’s degree in Producing Film and TV as well as a bachelor’s degree in Business Administration & Economics.