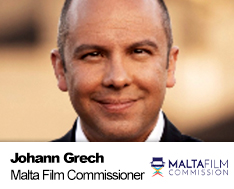 Johann developed and honed skills in the freelance market and the agency business before occupying the role of Head of Government Marketing within the Office of the Prime Minister between 2013 and 2017. He was appointed Malta Film Commissioner in December 2017. During the first mandate, more productions were filmed on the island, which generated around €82 million for the economy. In 2018, Johann launched a detailed masterplan for the Malta Film Studios. Even though Malta’s history as a destination for film production goes back almost a century, the Malta Film Commission was set up in 2000 with the dual aim of supporting the local filmmaking community and strengthening the film servicing sector. He implemented a strategy to grow the film industry further, by raising the cash rebate financial incentive to 40 percent cash back – this put Malta on the map and at the forefront within the European Union. Johann has a BA (Hons) degree in Communication Studies from the East London University and a Master’s in Corporate Communications and Public Affairs from the Robert Gordon University, Aberdeen.