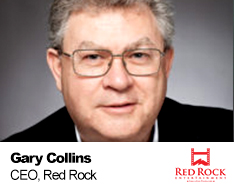 Gary Collins’ career in the film industry began in 2012, shortly after Gary started Red Rock Entertainment which works in conjunction with the UK’s most prestigious production companies to raise equity for independent film and television projects. Red Rock offers a suite of film-investment opportunities from private-equity and distribution vehicles to HMRC Enterprise Investment schemes.

A strong entrepreneurial spirit has run through Gary’s career, which spans 40 years of experience in sales and marketing. He set up his first company in his early twenties, before moving into the finance sector and diversifying into regulated and unregulated investments. This breadth of experience combined with specialist know-how is at the core of Red Rock Entertainment’s offer to the UK’s independent film industry.

The company’s UK headquarters is based at the iconic Elstree Studios where, in the last year alone, 11 film and TV projects have been given the greenlit, involving A-list UK actors such as Timothy Spall, Steven Berkoff, John Hurt, Alice Eve & Joanna Lumley. Gary’s industry knowledge and expertise has also featured in national news, with commentary on the impact of Brexit towards the UK film industry.

Outside of Red Rock Entertainment, Gary puts his investment talents to work on behalf of Rays of Sunshine, a charity that brightens the lives of children who are living with serious or life-limiting illnesses. He also contributes to the future of emerging film talent by investing in short-film competitions and schemes run by Signature Pictures, a social-enterprise production company, and Jobcentre Plus, which provides training and work-experience opportunities to unemployed young people. He also sponsors his local football team, Borehamwood FC.

For the last four years Gary has been elected to be a judge and mentor at J.E.T.S (Junior Entertainment Talent Slate) at Berlin Film Festival. Gary is a regular speaker at film festivals around the world speaking about his knowledge on the film industry.  In November 2019 Gary was awarded London CEO of the year by the Global Media Agency.

Gary’s personal philosophy is to facilitate the creation of ground-breaking Investment projects by helping to reduce the risk for potential investors in UK film and TV projects. The success of this approach is borne out by the range and quality of the titles on Red Rock Entertainment’s fast-growing slate.